A confronting look at Jihadi weaponisation of commercial drones 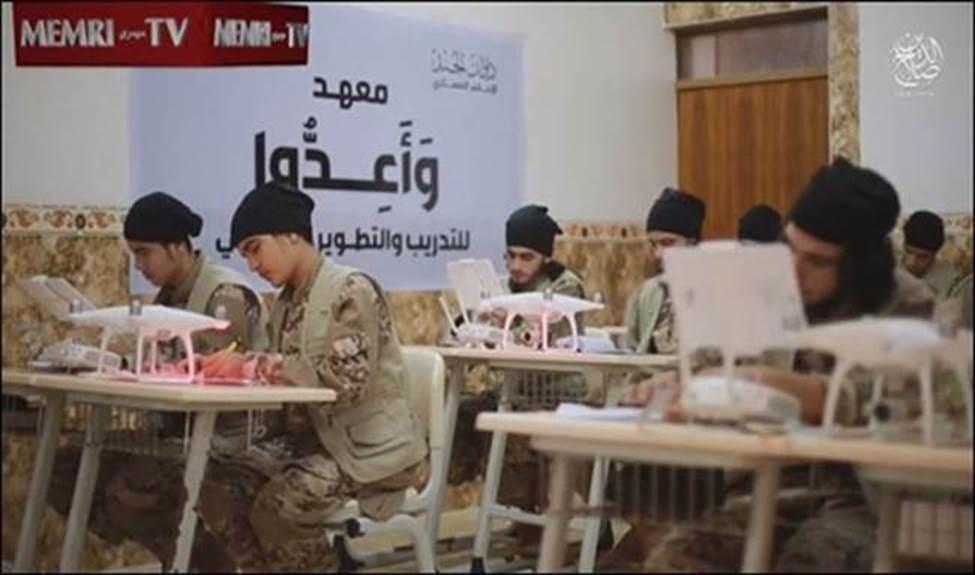 This article contains some of the most confronting imagery and vision of uses of weaponized commercial drones by Jihadi terrorist groups in the Middle East.

Suicide vests and car-bombs have quickly become a household phrase when conversing about the war on terror. The Middle East has been the focal point for destruction and violence from both sides, for many years now.

More often however, technology starts to have a flow-on effect in times of war; even to the point of mass-production and innovation by those who have nothing.

Only a two years ago, the sound of a fighter jet approaching groups of fighters in the mountains was often reported as ‘anarchy’, leaving fighters scrambling for cover in retreat. These days, the tides have turned and terrorist-led drones harbouring munitions are dropping explosive payloads, almost silently, from the sky.

The Middle East Media Research (MEMRI) is by far one of DroneSec’s first-to-hear sources of drone use by jihadi organisations on the ground, and many of the images from the battlefield we’ve released are attributed to their efforts. This article contains only a few of the very dramatic jihadi/ISIS drone pictures released by MEMRI, you can reach them by scrolling down.

One of their most comprehensive pieces, ‘A decade in Jihadi organisation use of drones’ has just been published by Steven Stalinksy and R. Sosnow – an incredible walk through which should be read by anyone in the drone security, or counter-drone/anti-UAV market.

It’s an absolutely fascinating read, incredible, however lengthy. We’ve highlighted some snippets, images and videos below for some very interesting quadcopter and commercial drone sections, but most of the substance is in the full report. We’ve also included the introduction and then some bookmarks for quick viewing for the areas that may interest you, we recommend heading over to the original report to view it in full.

Introduction: A Brief History Of The Use Of Drones In The War Against Terror

“While drones have been used for military purposes in one form or another since World War II, when they served as gunnery training targets,[1] their use increased greatly after the September 11, 2001 attacks. Drones are capable of highly advanced surveillance,[2] and already used by law enforcement. They can carry various kinds of electronic equipment, including live-feed video cameras, infrared cameras, heat sensors, and radar.[3]

Some military versions can stay in air for hours or days at a time, and their cameras can scan entire cities, or zoom in to focus on specific small objects from far away. They can also carry Wi-Fi crackers and fake cell phone towers that can determine location or intercept texts and phone calls. Drone manufacturers themselves acknowledge that they often are used to carry weapons such as Tasers or rubber bullets.[4]

The MEMRI Jihad and Terrorism Threat Monitor Project has been monitoring jihadis’ use of drones over the past decade, and has seen their advances in research and development culminating in the Islamic State (ISIS)…since this video came out, ISIS has carried out drone attacks on a nearly daily basis, and releasing videos and still photos of these attacks.

This represents a major development in this area, and the MEMRI JTTM will be releasing further research on this issue in the future.

DroneSec summary of highlighted items below, no particular order:

On January 29, 2016, “Life in Syria (Muhajir)” posted on his Telegram account a photo of a man and a store-bought drone, captioned: “A brother from the surveillance drone team trying a surveillance drone in preparation of a battle!” (MEMRI)

February 21, 2013, the Associated Press published the original Arabic and English translation of a document dated June 17, 2011, which it titled “The Al-Qaeda Papers – Drones”. The list of 22 tips for dodging drone attacks included at least one believed to originate with Osama bin Laden.[117](MEMRI)

A super interesting one, where an ISIS twitter user ‘@mo_jnabi2’ posts a guideline for ‘hardening’ or ‘securing’ commercial drones (such as the DJI Phantom 3) from being downed.

“The document showed three drones downed in Kobane, explained that part of the problem is the drones’ limited range of 1-1.5 km, advised the use of drones by a different manufacturer, and discussed modifications that could be made, including a link to a YouTube video on the subject, to make them less vulnerable to being downed.” (MEMRI)

A number of documents detailed the many configurations and modifications that could be made to the drone.

March 24, 2015: ISIS Militants Show Off Drone They Claim To Have Shot Down

“On February 5, 2017, ISIS released three sets of photos documenting the organization’s weaponized UAV attacks in Iraq. The photos, taken in real time by the UAVs themselves, show grenades being dropped from the drones on Iraqi army and the Popular Mobilization Units (PMU) targets in different locations in the county.

These photos show that ISIS’s use of multirotor drones to drop grenades on enemy targets can no longer be considered isolated events, and that it constitutes a real threat to ground forces. The images were released to sow fear among ISIS’s enemies.”(MEMRI)

Targeting Iraqi forces in Mosul (on the right, the explosion as the grenade hits the target) (MEMRI)

Not only were they taught how to fly and weaponize drones, the students got a certificate at the end of their training. More information contained within the video below and the full report.

We hope this summary gives readers a little more insights into the current uses (and abuses) of Jihadi/terrorist uses of drones by ISIS in the Middle East.

The counter-drone market today, DroneShield, Arbitor, Department13, DeDrone, DroneDefense (and many, many others) is not built on smoke and mirrors – these are real, viable threats we are facing with real evidence to support its case.

People are dying at the hands of DJI Phantoms being weaponized and sent into battle, with the techniques and blueprints being uploaded on sites like twitter and justpasteit. In the wrong hands, this innovative and destructive technology could quickly be utilized by malicious actors in the West.

Here at DroneSec we are grateful to the authors at The Middle East Media Research Institute for collaborating, collecting and reporting on this research. Furthermore, we thank them for allowing us to share with you this incredibly eye-opening story.

EMRI material is used extensively by government bodies and legislatures; militaries – both U.S. and foreign; media; academia; and the public at large.

On a daily basis, MEMRI assists and lends support to all branches of the U.S. Armed Forces, including over 200 different units, in carrying out the War on Terror. Founded in February 1998 to inform the debate over U.S. policy in the Middle East, MEMRI is an independent, nonpartisan, nonprofit, 501(c)3 organization.