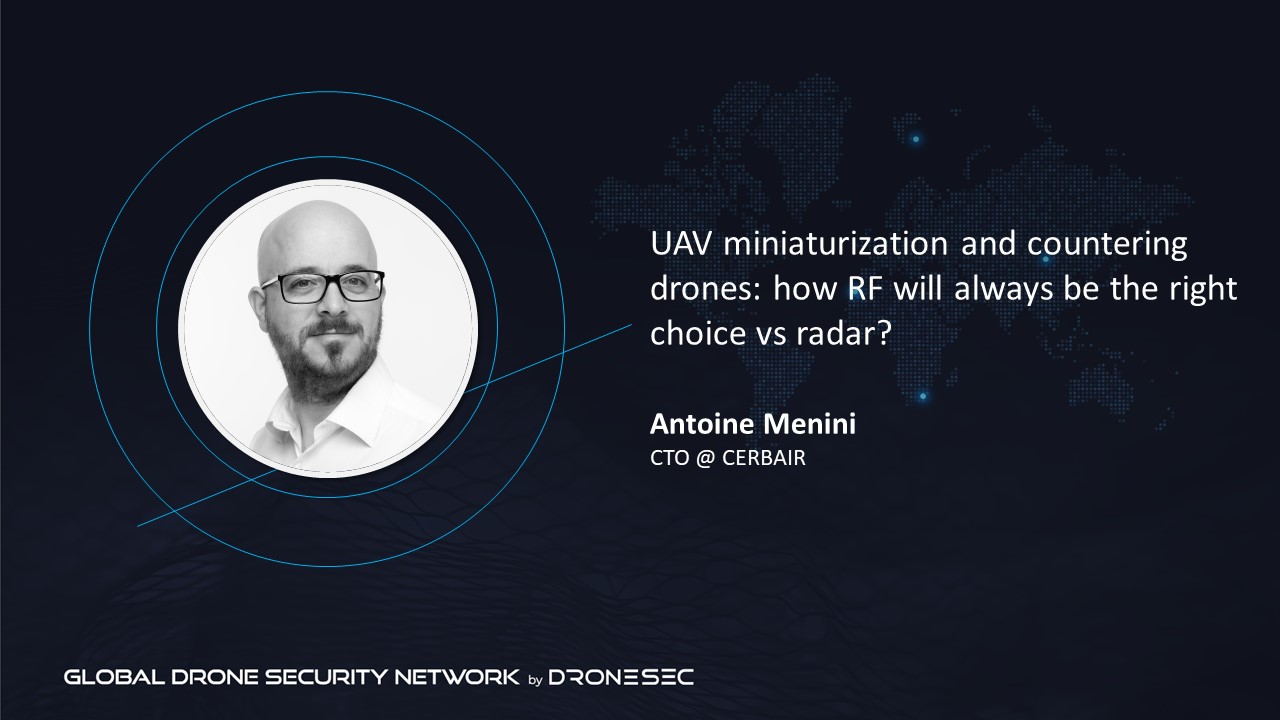 We are honoured to host presentation from Antoine Menini from CERBAIR. If you haven't watched his talk "UAV Miniaturization and Countering Drones: How RF will Always be the Right Choice vs Radar" please visit our YouTube channel.

UAV Miniaturization and Countering Drones: How RF will Always be the Right Choice vs Radar

Thank you very much, Mike. So, everyone, my name is Antoine Menini. And I'm the CTO of CERBAIR. CERBAIR is a French company that is specialized in providing Counter Drone system. The company was created in 2015. We develop, manufacture and sell our own Counter Drone solution based on radio frequency detection, and we work with major French and international government institutions. Today, I'm going to talk to you about the miniaturization of drones and its impact on radar versus RF detection. We are going to debunk some common myths about drone detection and I try to show you why RF detection still remains a good choice when it comes to detecting drones.

Oh, sorry. So first, let's look at the biggest drone manufacturer in the world, which is DJI. You will see in this slide the evolution of their consumer drones from the first DJI Phantom that was in 2013 to the latest DJI Mavic mini two that was released just last year. Also, it was a best seller, DJI has now abandoned the Phantom series to focus on the Mavic series, whose drones are way smaller and easier to carry around than the Phantom ones. You see, for instance, the DJI Phantom. The first one, weighed 1200 grams, while the weight of the latest Mavic mini two is only 249 grams. And we see the same patterns with other big drone manufacturers such as Parrot with the ANAFI drone, for instance, which is also a very small drone. And we try to have a look now at what makes the evolution possible. So drones are becoming more and more intelligent with more sensors, more features, better cameras, and at the same time, becoming smaller. So this change is mostly driven by the by the smartphone industry, the race to better smartphone cameras and more processing powers allows a lot of electronic manufacturers to get better components tha tare the same time, also cheaper. Let's take let's take for example the ARM CPU architecture. If you have a smartphone, most likely, you will use this kind of processor rather than the x86 Intel architecture used by a computer. The advantages of this architecture is that it consumes less power, therefore produces less heat, while at the same time being small in size. Apple has even decided to make a computer with this exact architecture. This is the apple M1,which is using the latest MacBook. So the ARM architecture is really great for low power consumption and this improvement in local CPU are now being used drones to allow them to have more processing power. Cameras have also improved a lot in in the last year. So you might have noticed that current generation of smartphones, now have two, three more cameras that have high resolution. And the same sensors that are used in smartphones can be used in drones to get awesome pictures. If we compare for instance, the size of the camera of a DJI Phantom with the latest cameras of the Mavic, we see that the size has decreased a lot and at the same time the resolution and the quality has increased. So these major pushes on the smartphone industry also benefits the drone industry. Batteries represents almost a third of a drone's weight, battery technology has also faced a strong evolution. First, also because of the smartphone industry now the batteries on the smartphone are getting better and better every year. But also more recently, thanks to the research on electric vehicles and electric cars. This means that nowadays, the battery can deliver the same amount of energy and are lighter than before, which lead to smaller motors and drones, smaller propellers and in the end, increased autonomy. So some studies suggest that the battery energy density, so this is the ratio of energy per unit of weight in a battery has tripled since 2010.This means that, we are now able to put three times more energy in the same battery than we were able to 10 years ago. And the drones that we see now, the DJI Mavic Air, for instance, were technologically not able to exist 10 years ago. The way we use drones, has also changed a lot. So 10 years ago, drone couldn't do a lot except for maybe flying a little bit not far away, and not very long range. The battery didn't last as long as today. And flying a drone was more than a hobby.