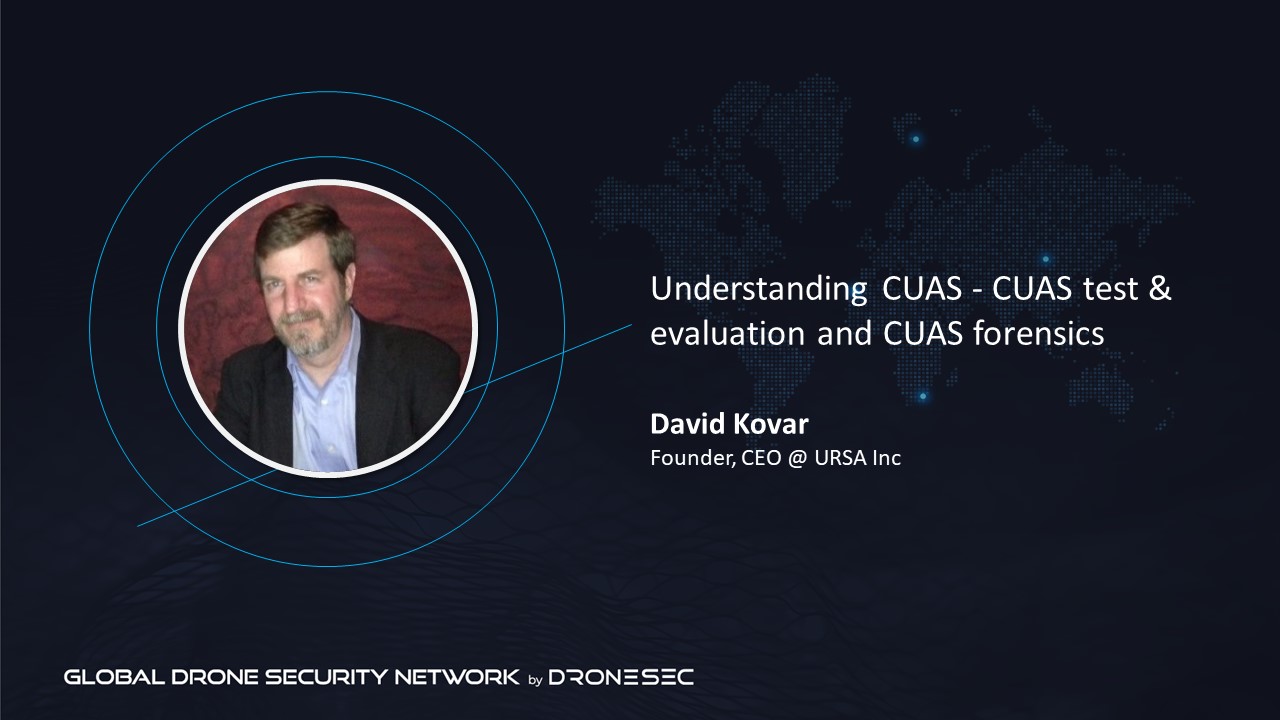 We are honoured to host presentation from David Kovar from URSA. If you haven't watched his talk "Understanding CUAS - CUAS Test & Evaluation and CUAS Forensics" please visit our YouTube channel.

Thank you very much for the opportunity. I really enjoyed participating the last time that we did this, and you've got a great set of presenters and you've got a great audience and that, the opportunity to engage in conversations with peers and with people that are facing these challenges is tremendously valuable. None of us are experts in well, we are experts to a point. But none of us have learned everything that we need to know. We are constantly learning. And some of that comes from the sort of research and development that you and I were talking about. But a lot of it comes from conversations. And we were talking about that trusted third party we were also talking about intelligence sharing. Participating in opportunities such as this, and in your Slack channel and via your platform is a really great opportunity for everybody who's interested in these problems and contributing to solving these problems, to have a voice and to help each other learn. And so really excited about that and very appreciative of everybody who's participating. If you just joined us and missed the first 15 minutes ago. My name is David Kovar, I founded and run a company and company called URSA Inc. And URSA stands for unmanned robotic systems analysis. Our focus is on making sense of the behavior of unmanned systems and in particular, UAVs. That's my phone number, that's my email address. This deck will be available at the end of the presentation. There's a URL in here that goes to a series of blog posts that I did on this topic. So everything that you're about to see, you're going to get all these slides. But if you go to that URL, you're going to get a lot more information that digs into all the various aspects of what I'm about to talk about. You're welcome to reuse this information. The only thing I ask is that you cite our effort. And if you're interested in having conversations about it, do let me know. I'm happy to engage in those conversations. My background. I've been doing digital forensics and Cyber Security Investigations for a very long time now. For those not familiar with the terms, digital forensics, from my perspective, is about extracting information from individual devices and doing a really deep dive on that device. Cybersecurity, and particularly incident response investigations are really about extracting enormous volumes of information from a very large environment. So a fortune 50 company, for example, things like that. I've done both of those and other cybersecurity related work. And that really helped inform what we're doing now, which is extracting information from individual UAVs or Counter UAS systems, but also extracting information from the very much larger environment. So 50 Counter UAS systems scattered around the United States, and UAVs that are found or otherwise, the evidence is extracted from all over the world, and bringing all that together to help do trend analysis, threat analysis, all sorts of other things. I've got five plus years of private sector, UAV forensics and analysis, I suspect that puts me inthe top, some very small percentage in the world, I've really been looking at doing this stuff for a very long time. There are other people out there that are as good as I am or better. I'm not saying that I'm the best. I'm just saying, this is a passion of mine. And I'm very excited and thrilled to be able to participate in the community in doing this sort of work. In the lead up to this, we were talking about trusted, unbiased third parties. That is very important to me and to our firm and to the people I work with. We have a strong desire to understand and to show how systems work. And we try to do this in a supportive manner that does not represent the financial or other interests of any particular party. We've been developing a general purpose telemetry analysis platform for analyzing and visualizing telemetry data. And we can currently extract information from a wide variety UAVs, from Counter UAS systems from ADSB data, which is manned aircraft telemetry AIS data, which is just marine telemetry data. And we're looking at how to intersect that and sort of tell stories of not just how UAVs are operating, but how all these systems are interoperating and relating to each other. So that's the end of the marketing pitch.

There's a FAA exercise doing Counter UAS test and validation at five different airports in the United States. One of the interesting requirements for it was that the vendors are obligated to install the system and then walk away from it for a month. So the vendor, any detection needs to be alerted, needs to get to the FAA via the system as it's installed. It's not gonna get tweaked on-site. Like, oh, wait a second, we didn't properly adjust the sensor for this operating environment, or we didn't understand that you're gonna be using fixed wings, that sort of test is really powerful. There are also times that you want the vendor to evolve on site, because doing test evaluation is great for vendors to really improve their systems. So keep in mind what you're trying to accomplish and what your opportunities are. At a bare minimum, get the vendors to explain how their systems are working, and to show you what the user interfaces so that when information is coming in via the user interface, then you understand it. It's a great opportunity for that sort of information sharing. People traveled to the site, you know, take half a day to train everybody on how all the systems work. It's useful. If you can avoid it, don't run one exercise with just one vendor, get as many vendors as you can get to the exercise at the same time. That gives you some opportunities to compare and contrast them. They have intellectual property, you need to give them the opportunity to make sure that the other vendors are not learning how their systems work. So due respect their needs as well as yours. But if you're gonna go through all the effort to get multiple vendors there, to get to do the exercise, get as many vendors there as you can reasonably support. Don't let the vendors reconfigure and modify the system during the exercise. Parentheses without clearly logging it. If they change the nature or the configuration of their system during the exercise, and you don't know that, then different results over the course the exercise may be hard to understand without that context. We had a vendor that changed the orientation of one of their panels, and that had significant effect on some of the results. So just make sure that you document that. Collaborate and share, I'm saying don't sign non-disclosure agreements, you're probably gonna have to sign non-disclosure agreements. And this goes back to what Mike and I were talking earlier on. So this is me, get a hold of me. Since I have a couple extra minutes, I'm going to show you one quick thing that is sort of related to it. There's a variety of Counter UAS systems deployed around Dallas Fort Worth International Airport in Dallas, Texas, well, near Dallas and Fort Worth. We have data from those sensors over a month's time, actually we have done more than that. But this is looking at data from all that time, we combine that data with ADSB data. And what this shows is, all of the times that a UAV came in within 2000 meters of manned aircraft in this particular area, the red dots are within 750 meters. So and there are a number of red dots. So this is one of those examples of, there is great value in Counter UAS systems, even if all they do is detect, track, identify. There's no mitigation going on here. But it's helping the FAA and other people concerned about the airspace understanding what's actually going on. So they can make informed decisions, so they can make regulatory decisions. So I would, and understanding how effective the systems are is still important for this. So the take home here is that, if you're doing Counter UAS work, there is great value in deploying the systems and sharing the data as I am doing here, to help everybody understand what's going on. Our result produces this, it's got the callsign of the aircraft, callsign of the UAV, distance, you know, just data crunching. So that is the end of my presentation, I will stop sharing. And turn it back over to Mike.