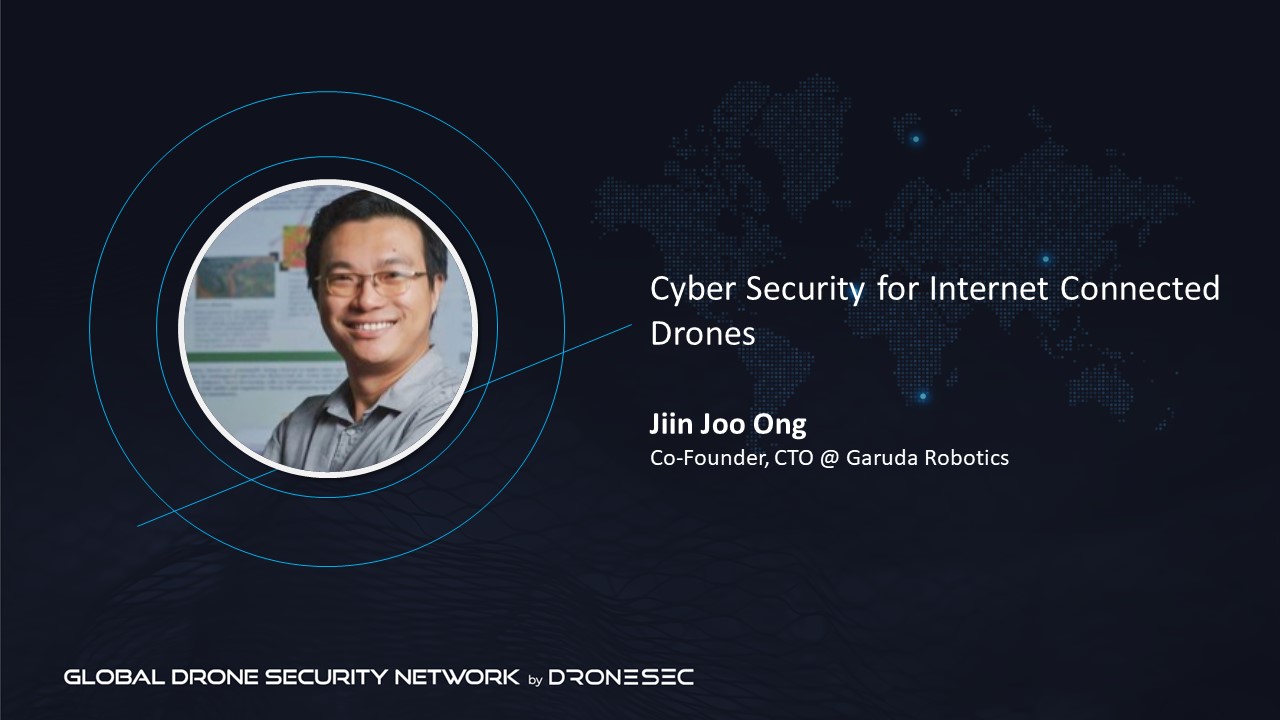 We are honoured to host presentation from Jiin Joo Ong from Garuda. If you haven't watched his talk "Cyber Security for Internet Connected Drones" please visit our YouTube channel.‍

All right. Thank you. And Thanks, Mike. And thank you everybody for dialing in. This will be the first time I'm speaking at DroneSec. And a lot of our sharing we're going to do today is based upon our experience in Singapore and Southeast Asia. I hope is going to be useful for everybody sharing. So I'm going to focus a lot about internet connected drones, because that's something that comes close to my heart. And we have been trying to push out the internet as the kind of backbone for drones. Before I start maybe I'll give a quick introduction about our company, Garuda robotics, we are an AO company we're based in Singapore, we have presence in Malaysia. But we also fly pretty much everywhere in Southeast Asia and South Asia as well. Our business is organized into three different segments, right, so we are in on one side. In the left side, you have the FlySafe product team to look at BVLOS, it's a very important capability. And we were active in doing inspections, deliveries, review command centers. And we also organize a lot of training and compliance consultancy for customers. In the middle you have our GeoSmart team which very much focus on the artificial intelligence type of thing, we have built applications for facilities management, smart cities, and plantations and so on. And we use geospatial technology as an AI, machine learning computer vision in order to get our drone data analyzed. And on the right, we have a business around security, specifically around Homeland Security, to help airspace management for the regulators as well as cyber security. And this will kind of be the focus of this, of today's topic. And in general, other kind of homeland security use cases like delivering an AED drone to an air station. Now this slide is just to kind of motivate why we talk about internet connected drones. It's a, in my opinion, it's an inevitable outcome. Right? So the fact that the drone industry today is so vibrant, and there's so many players, it's also partially driven from 10 years ago, we started adopting mobile based technologies, right? We have GPS becoming so cheap, and all these IMUs, mem chips, and it is becoming so affordable that people could just slap it onto a drone and start flying. And you have, and you end up with many, many companies being built around these use cases. Why not go all the way, right? So to put a SIM card on a drone, basically, what we say. So this is, these are numbers I took from GSMA and I apologize for those who I borrowed quite a bit of pictures from a different slide and study. So GSMA published a study just, I think this id last year, right? And these are the sort of numbers they said right? So a lot of drones, especially their estimate to be 6.5 million drones, by 2025, will be connected to the internet in real time, right? And a lot of it will be in logistics and transportation, public sector and so on. The ones I dotted up are the ones that we create, and we have a lot more information about and the product that we have built around these internet-connected drones. And this is not kind of a first day. I mean, I guess we have been we've been trying to do this for the last five years. And these are some of the examples of ourselves as well. Some of our partner companies in Singapore, who have been flying some internet-connected use cases, right? Example would be we'll be working for a hospital called Parkway Pantai, who do, who try to do like, delivery of blood samples. Another example would be the Maritime Logistics, which I think last week we did a bit of a launch of a maritime drone estate with a couple of other companies who are saying that we're going to use this maritime drone to do shorter ship deliveries. At the same time, we have the first responder side right? We created a system called the responder, which is to deliver AED but also other kinds of emergency medical devices. Again, controlled by the internet, right? For incident response, we have a product together with a partner, fly dynamics, to do perimeter patrols as well as respond to incidents like fire and so on, coverage. During the last year's lockdown period, we've been helping government customers to do safe distancing by connecting, again drones, directly to a cloud and running computer vision algorithms to find where are people crowding up to prevent all the virus from spreading and so on. And last but not least, we've be working MNOs like Singtel where we can try to do something called UAV hardware tracker, to track drones as they fly to give the regulator's a full vision of the airspace, right? So this is basically something related to the upcoming topic of Remote ID.