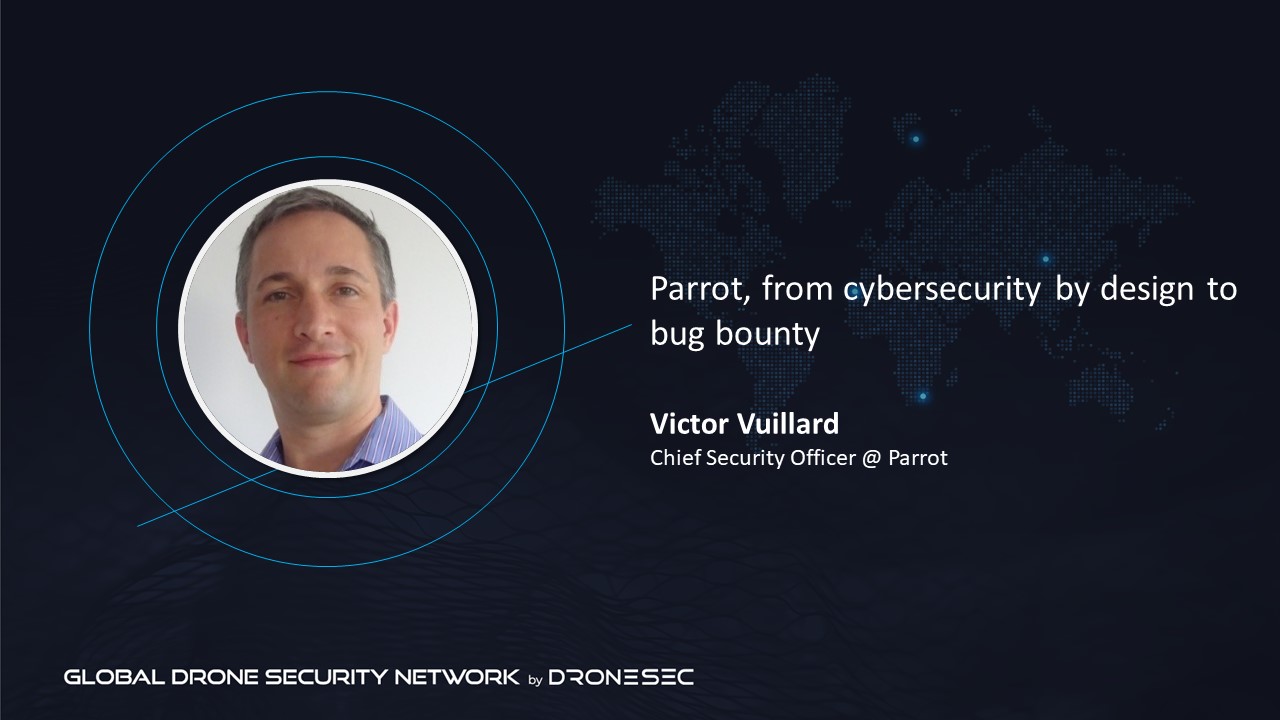 We are honoured to host presentation from Victor Vuillard from Parrot. If you haven't watched his talk "Parrot, from Cybercrime by Design to Bug Bounty" please visit our YouTube channel.

Parrot, from Cybercrime by Design to Bug Bounty

Hello, everybody. And nice to be at GDSN again, it's a real pleasure for me. And I talk to you today about cyber security at Parrot and what brought us to bug bounty. So just before starting, I don't know if you see my slide. Yes you do. It was quite important to explain the whole journey to the bug bounty, because at the end of the day, bug bounties, I would say is kind of an accomplishment. But it is there because we are a few steps before and it makes sense, because we did a lot before that. So just before I begin on cyber security, just a few information concerning Parrot for those that don't know us. So we design and manufacture small drones. And our latest product is ANAFI USA, which is an awesome drone. Really, it's quite small, and it can be unpacked in less than a minute. It's really quiet. But still, it has an awesome capability. And it can zoom 32 times, which means that you can basically see someone at two kilometers away and see if people have a gun, or have a precise view of what's happening there. And, of course, cyber security and trust is also quite important because this drone is made in the US and we had careful choice of components so that it's NDA compliant. So there is basically what's about ANAFI, it's an awesome small drone, but very powerful. And of course, secured. So first, let's talk about security by design. It's not quite easy to define security by design, because there can be a lot under this definition. But first, it's important to mention that, for us, security by design begins with people. People are quite important because it's them that design the product, develop and implement what's in the product. So security awareness at Parrot is not just a matter of the security team it's really a concept. It's a awareness that is spread across the whole organization, from the CEO, to product managers, to developers. And basically everybody is aware of cybersecurity. And to me, that's one of the main point, it's quite important that people get involved, that people understand what are the security need, and understand that it's important to protect your clients' data. So for me, it works first, because people are there. People with really wide range of skillsets at Parrot. And among those skillsets, they get better and better at adjusting the security and implementing security. So that's the first point. And this allows us to implement security from the beginning of projects. You notice many produce for which cybersecurity is kind of an add on. It's an afterthought, sometimes at the end of the development of a product or even from time to time after it's out on the market. And it's quite different at Parrot because cybersecurity is there from the beginning. And when we start a project we wonder what is a real need and what we have to improve into that project compared to previous ones. So as far as it's a priority for Parrot, we define it just the same ways that we would define that a drone would have to fly for this amount of time, and would have to see with this amount of zoom, or thermal capability and so on. So cyber security is there, and it's there from the beginning. And cybersecurity is not just a matter of implementing it in-house at Parrot, it's important to have this broad view and global view, and to include all suppliers and especially, all the supply chain that provides some components or from time to time able to implement part of the software. So concerning this supply chain, we've seen in the past a few products in the electronic consumers parts that  might be backdoored, or may have huge vulnerabilities. So it's quite important at Parrot that we check what is the level of security of the different suppliers and we make sure that we trust where the components come from. So that was a real need for NDA compliance and for Blue sUAS program for ANAFI USA. But it's now part of the way we do things. So it's a great improvement also. And, of course, when we speak about security by design, it's important to do it at the very beginning and define what the security need is and what the different security features will be. Then implement but also check. And that's what we will focus on when we speak about audit and bug bounty, because this part is quite important. And this cycle helps us to implement continuous security improvements, which means that over time, builds for one product, and also from product to future products will continuously improve cybersecurity, which means that in the previous years, we've done a lot so far. But we won't stop there and we will continue to keep integrating even more security and protect user data, always better so that we make sure that we minimize the potential impact of a defect if one day there is one.

So an example of questions we could ask ourselves when we design a product. And by the way, that's also the kind of questions that clients asked to Parrot just to understand how we implement security. So we've got the drone, most of people would wonder how we authenticate and encrypt the video links between the remote controller and the drone, they want to understand how we protect the user data that is stored on the drone, and how we would protect the drone itself. Because it's important that no attacker could put malicious software into the drone. And for some people it's also quite important to protect flight data. For example, for forensics analysis. Because if a drone is lost or caught by an adverse party, you may not want this adverse party to understand where you took off, where you've been flying for this mission or for previous missions. So it's important, especially for defense and sometimes for public safety, to also protect this kind of data. So once we've defined the security need, of course, we implement solutions. So here are just a few examples of those solutions, so if you wonder how we authenticate and encrypt the radio link between the remote controller and the drone. So basically, we use a standard WPA2 protocol. We define for each pair of drone, and remote controller a unique key. So first the fact that there is a unique key makes it secure by default, because there's no default password that an attacker could guess or could reuse very easily. But then, that's not the only thing we define. Because even if it's unique by default, the user can define its own address to to make sure it's his password, and not just the one defined by Parrot. If you wonder how we protect data that is stored on the drone, so that's one of the best enhancement on ANAFI USA. We implement a full disk encryption on the SD card. Basically, all photos and videos taken by the drone is stored into this SD card. And we don't encrypt data file by file, but the whole disk is encrypted. And that's great because it allows to protect every data. And it also prevents some forensics techniques that will be used, for example, to retrieve just one data, or try to intercept part of the data before it's encrypted. So here, everything is encrypted. And we use best in class algorithms. Just to name it, AES-XTS with 512 bits key length. And what's quite important is that we don't stick to marketing cybersecurity, we also implemented it the right way. For example, with XTS, we choose the right block mode of operation, we choose the longest possible key length. And the most important thing is that we make sure that this key is never stored on the drone. Because if the drone is lost, someone could try to retrieve this key. And here, it's completely different because to make it secure, we have this key that is stored into the software that is in the remote controller, and when it's paired to the drone the remote controller transmits the key to the drone in a secure manner. This key is never written into drone. So it's never written to disk and only used on volatile memory, which means that if the drone is lost, as far as accessed with the volatile memory is protected. As far as the drone is switch off, everything is just lost and nobody can retrieve the keys that would allow an attacker to to to decrypt data. So it's important not just to stick to the security features, but also to implement it the right way. So just to continue to the different questions. So if you wonder how to ensure the embedded system integrity and make sure that no attacker would put a malicious software into the drone. So what's quite important is that first, we harden the system, so that there's no remote access to the embedded system, and no way to connect to the operating system. But then when the software evolves, the drone makes sure that there's a legit digital signature before applying a firmware update. So doing that we make sure that this firmware really comes from Parrot. And we make sure that if an attacker try to modify just one bit, the attacker won't be able to push this update, because the drone would notice that just one bit difference, which would make the digital signature invalid and be disregarded. So that's one of the example of the way we protect the system. And finally, how do we protect flight data from forensics analysis. So it's not implemented on all versions of drones, but for security editions which mean governmental use, we have additional antiforensics techniques that prevent an attacker from accessing fly data return to home or return to position, and any data that the drone would have to keep in memory during the flight, just so that things go well. So it's important because we could say there's no data on the drone. But during the flight, you need some data. For example, if you lose the video link between the remote controller and the drone, the drone has a return to home, or you could even define a return to position. So if you define a position before takeoff, so that the drone won't come back to you, that will define positions that an adverse party won't guess where you are. So if you want to protect all this data, you have to make sure that nothing is written to disk and data is protected, so that no one can retrieve this. And lastly concerning data, of course, we can fly our drones with no internet connection. And there is a way to push firmware updates completely offline and import maps offline. And there's a mechanism to unlock flying in the no-fly zones.